Tomáš has a kind of interesting habit. Whatever country he visits, he always sets out to a short visit to the local barbershop. And irrespective of language barriers, he just has his hair cut. This time on his way to Georgia, where he went for holiday, he visited a barber in Tbilisi:

In Georgia we dropped in at a barber shop called Twelve Houses. The feeling of a VIP club was even intensified by the fact that we were ringing the bell at the entrance. A female “usher“ welcomed us in an apartment furnished in a luxurious way. She took us to the back room where the hairdresser discussed the hairstyles with us… For the first time during testing barbershops it was the hairdresser who suggested the hairstyle for me. He had a look at me, came up with a hairstyle, all good. That´s what I appreciate a lot.
Then the usher scrubbed my head and later on, I was sitting around in a hairdresser´s chair again. During the haircut I found out that the hairdresser is actually a Russian who moved to Georgia. He supposedly likes local people and their mentality. It must be also cheaper for him in here compared to Russia. He used really big scissors and he seemed like Edward Scissorhands to me a little bit.
After a long time even my parody to a beard was shaven off… I must admit that it was rather involuntary, but after I went like “do what you want“ I couldn´t object anymore . It felt like… I looked like my very own younger brother. Overall, I was satisfied. Pity that he did not use straight razor. A pleasant change was that I didn´t look like a soldier. Rather like a metrosexual from the west. So, a Georgian party could get started! 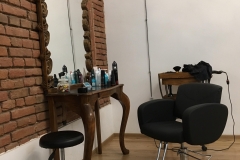 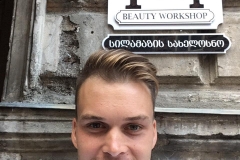 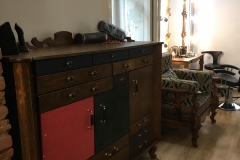 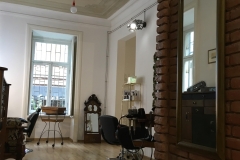 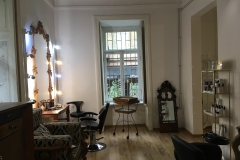 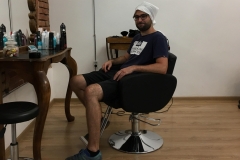 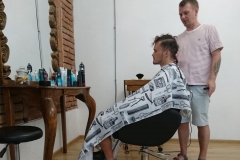