Tomáš has a kind of interesting habit. Whatever country he visits, he always sets out to a short visit to the local barbershop. And irrespective of language barriers, he just has his hair cut. This time on his way to Georgia, where he went for holiday, he visited a barber at Psycho barber in Tbilisi:

Psycho barber is really exhilarating experience, but certainly not for gourmets. Well, and they say that Napařenka is full of lunatics… A Pakistani man, Araš cut our hair and his buddy, an Iranian man called Ramir was giving weed to us in the meantime (which is legal in Georgia) and at the same time he was trying to get some whores for us (which I don´t know whether is legal). Totally loony.
When I was lowering my eyes during a direct discussion about whores, he asked me:“Why are you so shy?“ then he continued talking for a short while and then he psyched me out by saying „I´m not gay, but like a color I mean interesting color“. At this point, I was really rolling my eyes…
For shaving, he does not use straight razor but electric razor. As for the shape, he shaved my buddy´s hair well, but the electric razor cannot compete with straight razor. It proved right that straight razor is always more precise, shapes are then sharper etc. My appraisal – craftsmanship – C, but the atmosphere and the chatter around was so smashing that I´ll give a B. 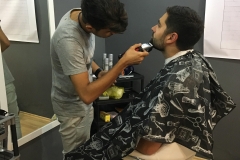 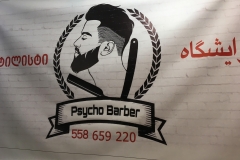 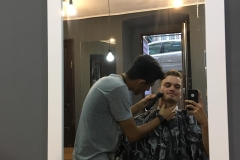 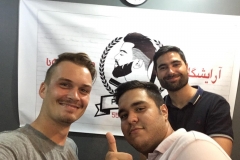 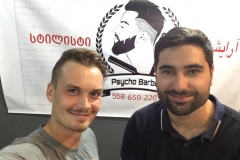 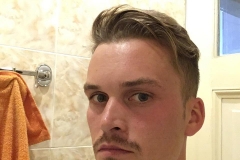